The Jayhawks of Kansas (Rock Chalk) were visited by John Brown from New York who fought on the side of the residents of Lawrence, Kansas in 1856.  The pro slavery Missouri criminal guerrilla outfits like Quantrill’s raiders including Jesse James, Frank James, Cole Younger and other lesser known outlaws.

Part of their careers’ work, they would come to Kansas to re-enslave former slaves who’d escaped and return them to their former owners in the slave state of Missouri for the bounty.

“William Clarke Quantrill (July 31, 1837 – June 6, 1865) was a Confederate guerrilla leader during the American Civil War. Having endured a tempestuous childhood before later becoming a schoolteacher, Quantrill joined a group of bandits who roamed the Missouri and Kansas countryside to apprehend escaped slaves.”  (Wikipedia)

John Brown certainly a controversial figure later organized a small uprising of slaves and the radical abolitionists their plan was to take over the Armory in Harper’s Ferry Virginia (now West Virginia) and with the guns collect an Army of slaves as they moved South through the mountains like Spartacus.

In the very heart of slave-aristocrat planter country Brown and his cohorts with very few slaves joining his rebellion were cut to pieces.  John Brown was captured, then tried and soon thereafter hanged.  Lincoln considered John Brown as insane.  Brown believed his method would end slavery with minimum loss of life.

Lincoln more lost control of the situation than decided for war to end slavery.  This, however, was the goal for many in the abolitionist movement.  John Brown’s body lies a moldering in the grave sung to the tune of the Battle Hymn of the Republic and the Battle Hymn of the Republic itself became songs sung by Yankees as the northerners were known.

Victor Hugo tried to get a Pardon for Brown and wrote letters before and after Brown’s hanging.  Hugo was sympathetic to abolition, though European.  Slavery was ended in Britain in 1833.  The French ended it soon thereafter.  The abolitionists knew the world expected the U.S. to follow suit.

“Victor Hugo, from exile on Guernsey, tried to obtain pardon for John Brown: he sent an open letter that was published by the press on both sides of the Atlantic. This text, written at Hauteville-House on December 2, 1859, warned of a possible civil war:

The letter was initially published in the London News and was widely reprinted. After Brown’s execution, Hugo wrote a number of additional letters about Brown and the abolitionist cause. Politically speaking, the murder of John Brown would be an uncorrectable sin. It would create in the Union a latent fissure that would in the long run dislocate it. Brown’s agony might perhaps consolidate slavery in Virginia, but it would certainly shake the whole American democracy. You save your shame, but you kill your glory. Morally speaking, it seems a part of the human light would put itself out, that the very notion of justice and injustice would hide itself in darkness, on that day where one would see the assassination of Emancipation by Liberty itself. … Let America know and ponder on this: there is something more frightening than Cain killing Abel, and that is Washington killing Spartacus.

Abolitionists in the United States saw Hugo’s writings as evidence of international support for the anti-slavery cause. The most widely publicized commentary on Brown to reach America from Europe was an 1861 pamphlet, John Brown par Victor Hugo, that included a brief biography and reprinted two letters by Hugo, including that of December 9, 1859. The pamphlet’s frontispiece was an engraving of a hanged man by Hugo that became widely associated with the execution.

John Brown’s last words, passed to a jailor on his way to the gallows. From an albumen print; location of the original is unknown.

I, John Brown, am now quite certain that the crimes of this guilty land will never be purged away but with blood. I had, as I now think, vainly flattered myself that without very much bloodshed it might be done.

He read his Bible and wrote a final letter to his wife, which included his will. At 11:00 a.m. he was escorted from the county jail through a crowd of 2,000 soldiers a few blocks away to a small field where the gallows were. Among the soldiers in the crowd were future Confederate general Stonewall Jackson, and John Wilkes Booth (the latter borrowing a militia uniform to gain admission to the execution). The poet Walt Whitman, in Year of Meteors, described viewing the execution.

Brown was accompanied by the sheriff and his assistants, but no minister since he had consistently rejected the ministrations of pro-slavery clergy. Since the region was in the grips of virtual hysteria, most Northerners, including journalists, were run out of town, and it is unlikely any anti-slavery clergyman would have been safe, even if one were to have sought to visit Brown. He elected to receive no religious services in the jail or at the scaffold. He was hanged at 11:15 a.m. and pronounced dead at 11:50 a.m.

Transportation of his body 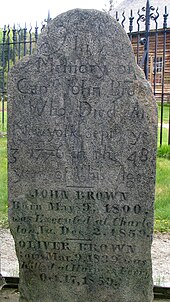 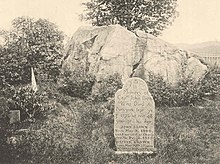 Brown’s body was placed in a wooden coffin with the noose still around his neck. His coffin was then put on a train to take it away from Virginia to his family homestead in New York for burial. His body was supposed to be embalmed in Philadelphia, through which the train would pass. However, because of demonstrations expected from both sides—there were many Southern pro-slavery medical students in Philadelphia—Mayor Alexander Henry “made a fake casket, covered with flowers and flags which was carefully lifted from the coach and the train and sped onward in its destination … In reality the train carrying Brown’s body never actually stopped in Philadelphia, and thus violence was averted by a ‘sham coffin’.” As a direct result, many Southern medical students and professors left Philadelphia en masse on December 21, 1859, for Southern medical schools, never to return.

In the North, large memorial meetings took place, church bells rang, minute guns were fired, and famous writers such as Emerson and Thoreau joined many Northerners in praising Brown. 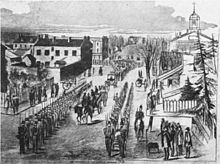 On December 14, 1859, the U.S. Senate appointed a bipartisan committee to investigate the Harpers Ferry raid and to determine whether any citizens contributed arms, ammunition or money to John Brown’s men. The Democrats attempted to implicate the Republicans in the raid; the Republicans tried to disassociate themselves from Brown and his acts.”

So here we are 155 years later.  In utter ignorance I am attempting to chip away at.  How did we get this ignorant.  Well liberal college professors desire Marxism and after all that is the fairest system.  Everyone suffers the same misery in want.

Because all individual incentive is removed and therefore soon no one is doing anything exceptional because there is no longer any reason to be exceptional or do anything beyond the RDA.  Recommended Daily Allowance.  The minimum you need to get by, according to the FDA.

The education system from the bottom wrung has been nationalized by elitists globalists whose vision is whirled peas through global government where we all live for the benefit of the collective.

Ignore The Ones Calling For Fainrness

That does not edify a man.  When we were younger the children would always say to me, “That’s not fair.”  I dropped what ever I was doing whenever I heard it and said, “My first job is teaching you to walk with the Lord.”  My second job is to make sure that you never ever, ever, walk out that door under any misconception anything in this life is fair.”  It is not fair.  Accept it.  It will never be fair.  Believe that.

The Battle of Gettysburg was a turning point in the Civil War, the Union victory that ended General Robert E. Lee’s most ambitious invasion of the North. Often referred to as the South’s high-water mark, Gettysburg was the war’s bloodiest battle with 51,000 casualties. It was also the inspiration for President Abraham Lincoln’s Gettysburg Address, considered one of the most important speeches in U.S. history. Over the next few days, hundreds of thousands of people will visit the area in commemoration of the 150th anniversary of the July 1-3 battle.

Gettysburg Was 150 Years Ago.

This is 150th anniversary of the battle

The battle has etched places such as Little Roundtop, The Peach Orchard, Pickett’s Charge, Devil’s Den, Cemetery Ridge, Seminary Ridge and The Wheatfield into our historic lexicon.

A visit to Gettysburg National Military Park in Pennsylvania is a special experience because the National Park Service has taken great pains to restore the battlefield to how it actually looked those first three days in July 1863. This year marks the 150 th anniversary of the battle and business owners say they are expecting millions of visitors.

Free black men from the north volunteered to fight in the Union Army against the Rebels of the south.  They were free men.  They did not need to volunteer.  They died alongside their fellow Americans to preserve the Union and I suspect none in this country were more committed to winning the fight and ending the slavery.  So what did BLM do?

54th Regiment pictured below the memorial to their honor

New Abolitionists And The Hog Wash

This is among the reasons I am myself an ABOLITIONIST.  I am for the abolishing of federal government support for higher Marxist Education that has directly and through secondary HOG WASH based on their own doctorates in HOG WASH created people ignorant enough to pee on the heroes of their own heritage.

To the 54th and all relatives of these brave men and Americans we apologize.

Now its time to stop sending your children to the secondary Karl Marx Indoctrination Centers falsely characterized as Universities here in the new dark ages.  Nothing there to learn except HOG WASH!

98.7 % of white American people did not own any slaves.  1.3% of Americans owned slaves 155 years ago.  Seriously enough already.  Some people don’t like me because I’m bald headed.  I could care less.  So grow up.

Thank you for visiting my site and reading my posts.  A big thank you to those of you worldwide who are buying my books. Please come again.  Leave any questions or comments below.  To anyone offended by this I have taken very careful aim and I do not apologize.  Chris.

Shop For Books at Books-A-Million

Shop For Books at Booksamillion.com

zZounds offers the lowest price on guitars from nearly every brand: Gibson, Fender, Gretsch, Epiphone Jackson, Ibanez, Martin, Taylor and many others. You can purchase over 125,000 different products from their website 24 hours a day.

20% Off Code in Video Below